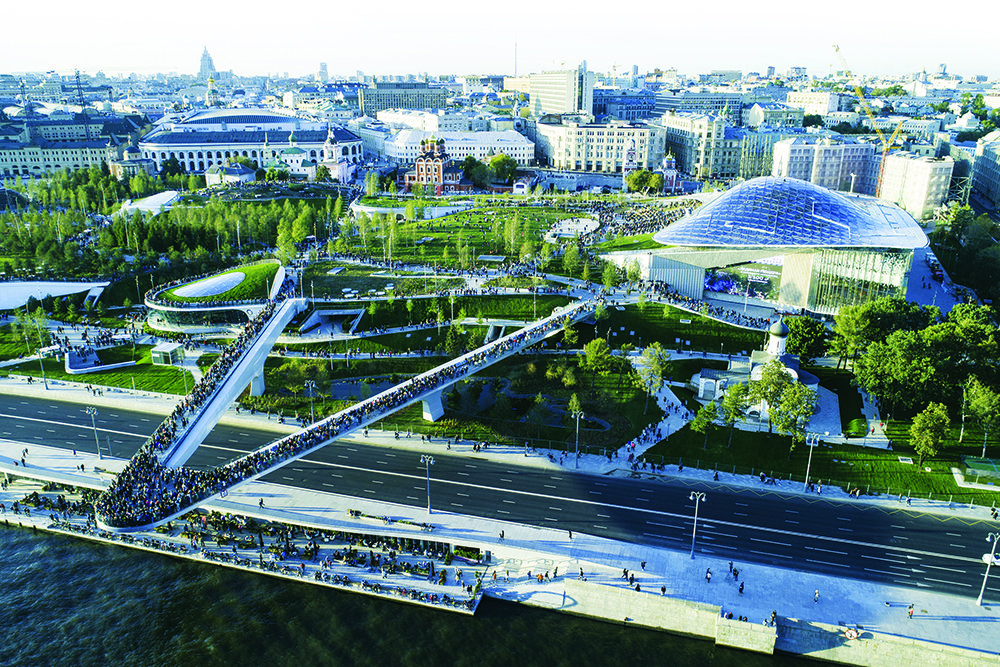 As the capital of Russia, Moscow witnessed the alternation of the three systems of power: Imperial, Soviet, and Presidential. The architecture here also retains traditional Russian style and modern style.

Visit St. Basil’s Cathedral, passing through Manezhnaya Square and the starting point of the Moscow Center, you can see the locals making a wish here. Entering the Resurrection Gate is the Red Square, and the first department store in Europe, Gum Department Store. The opposite is Lenin’s tomb.

Visit the Kremlin, Cathedral of the Dormition, Archangel Cathedral, and Church of Annunciation (at choice, depending on the situation).

Travel to Zaryadye Park, is a landscape urban park located adjacent to Red Square in Moscow. Zaryadye Park is the first public park built in Moscow for over 50 years, the last being the Soviet Friendship Park built for the 1957 Festival of Youth and Students. The park was inaugurated on 9 September 2017

The Moscow metro has the reputation of “underground palace”. There are more than 180 stations in metro system, each of which has its own features and ornaments, mostly related to local culture or history.

Visit Cathedral of Christ the Savior on the banks of the Moscow River.

Victory Square, which was built to celebrate the 50th anniversary of the victory of World War II, has a statue of the victory goddess on the square. In addition to the monument, the square also houses the Great War Museum and three different religious churches. On the other side, in order to commemorate the defeat of Napoleon, the Arc de Triumph was built.

Take flight/ high-speed train to St. Petersburg and arrive at the hotel.

Visit the St. Isaac’s Church, the essence of late Russian classicism. St. Isaac’s Church is located in St. Isaac Square, the center of St. Petersburg. The golden dome of church can be seen from the Gulf of Finland. St. Isaac’s Church took about 40 years to build, and the interior three-story iconic wall is decorated with gold, malachite and blue ore decorations, which is worth to see!

Nevsky Avenue is the main street of St. Petersburg. It was built in 1710 and is more than 4 kilometers long. It has been the social and cultural center of St. Petersburg since ancient times.

Visiting the Peterhof Garden & Grand Peterhof Palace, known as the “Russian Versailles”, the dozens of fountains and horticultural landscapes are one of the must-see attractions in Saint Petersburg.

Arrange for a cruise on the Neva River (about 40 minutes).

The Winter Palace (the Hermitage Museum), one of the world’s four major museums, is the most famous building in St. Petersburg. There are more than 2.5 million world-famous paintings and precious collections. The Alexander Triumphal Column on the square is to commemorate the pillars that defeated Napoleon.

The Yusupov Palace is a unique 18th-20th century architectural ensemble and a cultural and heritage site of federal significance acclaimed as the “Encyclopedia” of St. Petersburg aristocratic interior. The history of the Palace and estate dates back to Peter the Great’s epoch, the time of foundation of the Russian “Northern capital.” It took almost two centuries to build the estate. Five succeeding generations of the Yusupov princely dynasty owned the estate and the Palace from 1830 to 1919. Many glorious moments of Russian and St. Petersburg history are associated with the residence of the Yusupov family on the Moika River.

The Peter and Paul Fortress is the birthplace of St. Petersburg. The main building is a Peter and Paul church built with a 122.5-meter-high gold-plated minaret, and almost all Russian tsars are buried in the church.

Vodka, known as the “Water of Life” in Russia, is the best drink for winter cold. You will know more about the history of vodka and its various types. Be careful or get drunk!

Transfer to the international airport to take your flight back home.